Welcome to our new article about Versatile Video Coding! In this article we’ll take a closer look at the affine prediction algorithm and demonstrate how it works using VQ Analyzer — a bitstream analysis tool developed by ViCueSoft.

Inter Prediction technique uses optical flow, where every pixel on the frame can have a vector from the previous frame. However, signaling every vector uses big amounts of data, which is costly. For this reason, an image is split into blocks called prediction units (PU). Every block has only one summarized motion vector (or two in the case of Bi-prediction). 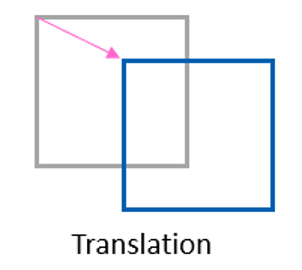 Classical motion compensation works with 2D translations — 2 degrees of freedom (DOF). It happens when you simply copy one rectangular block from one place to another. But the real world is always a bit more complicated. There is not much stuff that simply moves plainly over the screen, unless it is Super Mario, of course. Objects often rotate, scale, and combine different types of motion. Some of those movements could be presented with Affine Transformations. 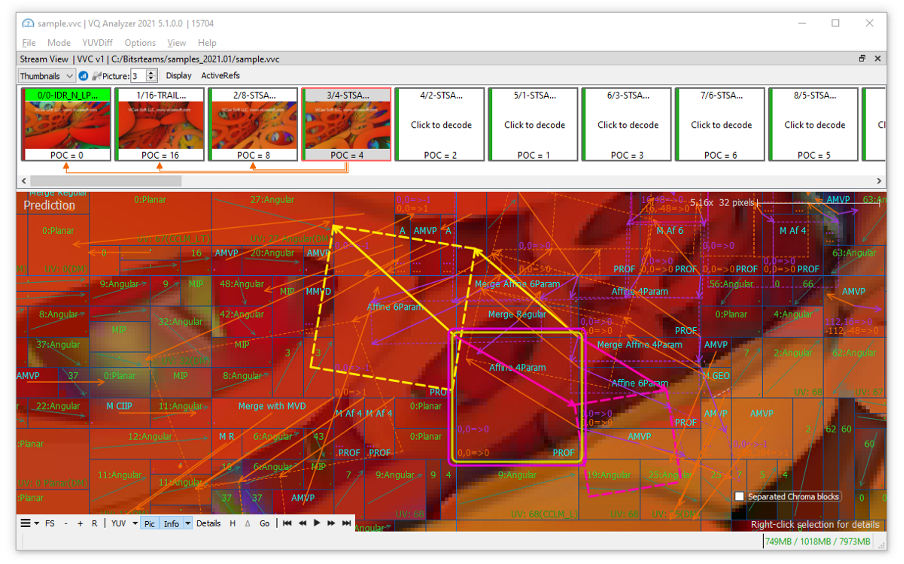 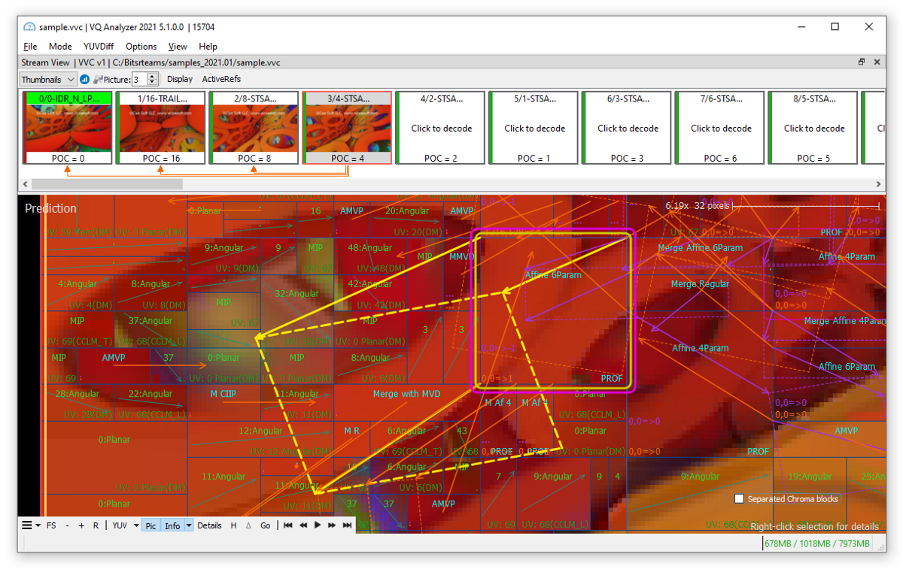 To lower computation complexity and memory access on hardware implementations, VVC applies simplification for an affine model which is block-based. Instead of applying vectors for each pixel, the block is divided into 4x4 pixel luma subblocks. VVC signals corner motion vectors for CU. Subblock MVs are derived from block control point MVs, according to the equations below, and rounded to 1/16 fraction accuracy. Then translational motion compensation is applied for each subblock. 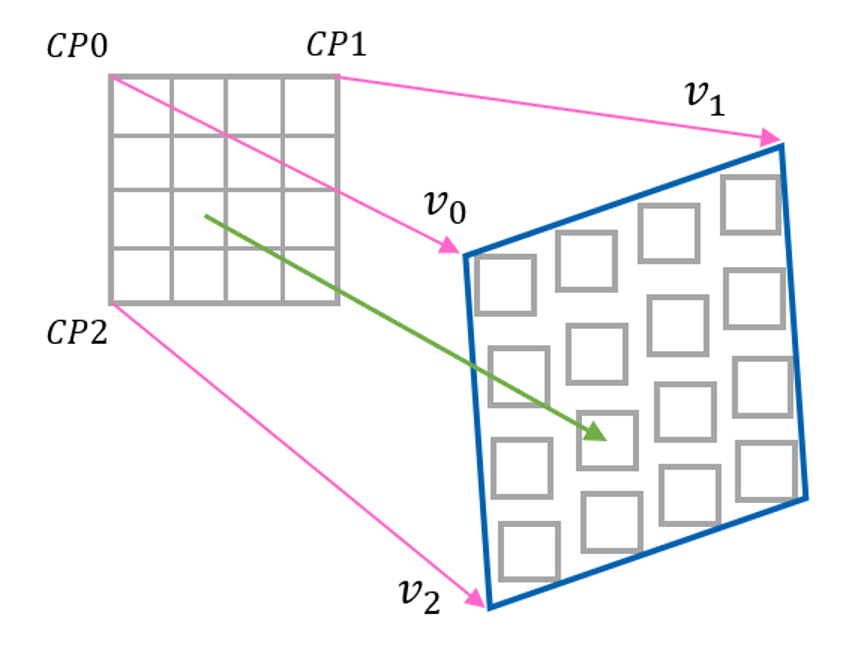 For a 4-parameter affine model, motion vector at sample location (x, y) in a block is derived as:

For a 6-parameter affine model, motion vector at sample location (x, y) in a block is derived as: 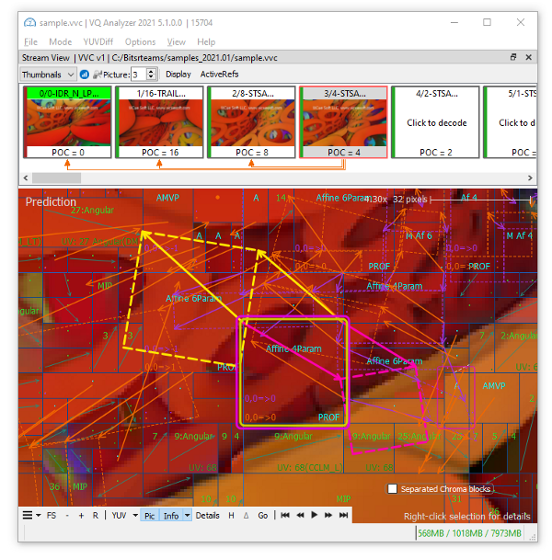 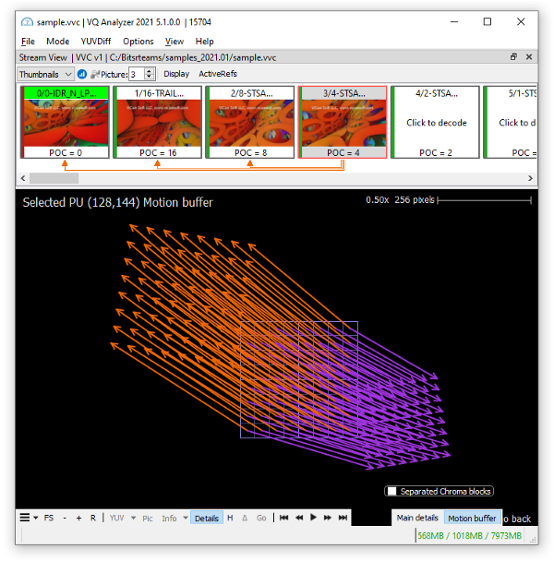 In this mode, motion information of spatial neighbor blocks is used to generate CPMVs for the current CU. There could be up to five candidates. The chosen candidate index is signaled in the stream. Candidates could be: 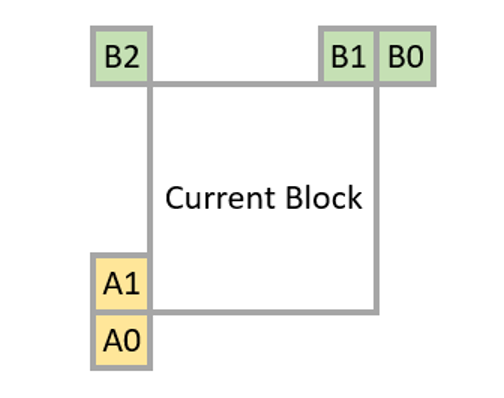 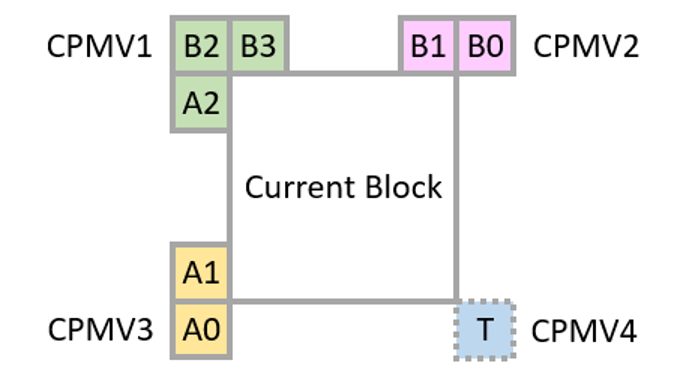 Constructed affine candidates are combinations of neighbors’ translational motion vectors. They are produced in two steps.

When the list is not full after filling it with inherited and constructed candidates, zero MVs are inserted at the end of the list. You can view affine block prediction details including candidate list in Detail View of VQ Analyzer. Here is an Affine Merge example: 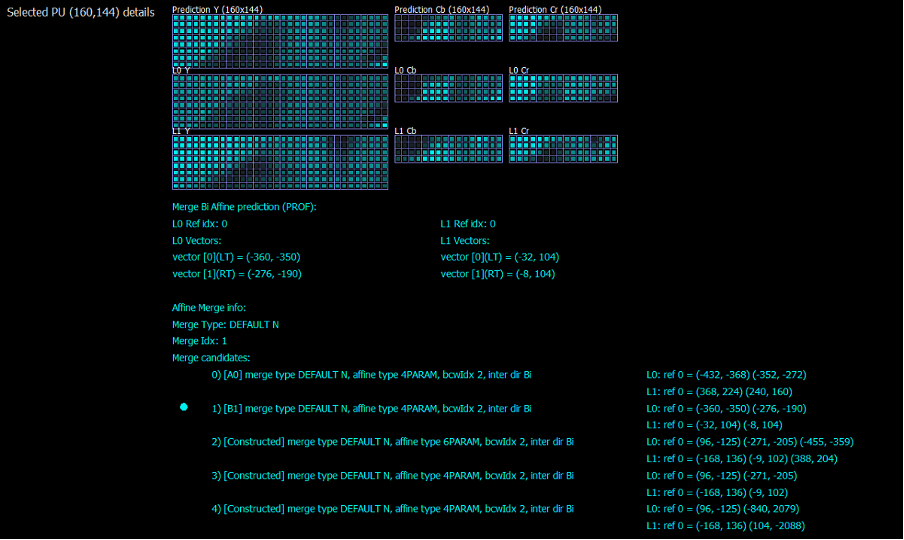 In affine AMVP (advanced motion vector prediction) mode the difference between vectors of current CU and their predictors is added to the bitstream: CPMV = prediction + difference Prediction is obtained using a candidate list, it is limited to 2 candidates.

The checking order of inherited and constructed affine AMVP candidates is the same as in the Merge mode, but it has an additional check — the candidate must have the same reference picture index. Constructed candidates could be {CPMV1, CPMV2} for 4-param mode and {CPMV1, CPMV2, CPMV3} for 6 param mode. Affine AMVP details and the candidate list also could be accessed in VQ Analyzer Detail View for a selected block: 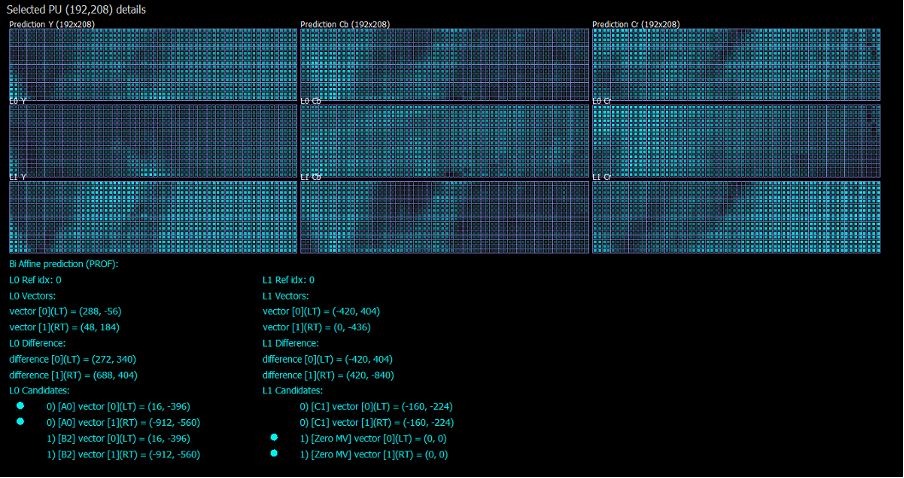 This is all for today. In this article, we demonstrated how VQ Analyzer from ViCueSoft can successfully visualize and display details for affine prediction algorithm in VVC. If you have any questions or comments, please feel free to add them to this article or write to us directly at info@vicuesoft.com.