My name is Evgeny. I am a Consulting Services Manager at ViCueSoft. In my role, I regularly assist customers with their video compression tasks and work tirelessly to ensure that they receive the ace user experience they deserve. Here, I’d like to demonstrate one of the user cases that we solved.

Live streaming using mobile devices such as smartphones is the norm in today’s world. Such transmission method may seem routine to an average smartphone user, but the underlying engineering challenges are complex. The volume of traffic is enormous and users demand speed and precision. Given the constraints of network bandwidth (4G/5G/WiFi) and reliability, a key engineering challenge is to transform the nature of the video data and deliver best possible user experience.

The following example would perhaps illustrate the challenges associated with network bandwidth inconsistencies. Suppose, you are streaming a live feed while travelling on a suburban train and suddenly you hit a tunnel. In an instant, the signal strength drops and the software would need to react rapidly in order to ensure uninterrupted transmission without minimal impact on stream’s visual quality.

Paraphrasing the abovementioned use case as a technical task we get the following input data:

For better understanding of our approach let me briefly introduce the video compression basics here.

Intuitively, video is a sequence of static pictures which follow each other over time. When we are talking ‘video compression’, our aim is to reduce the size of video data to the target size all the while not unduly compromising visual quality.

Why do we need video compression after all? The principal reason is that uncompressed video occupies enormous network space. For example, a 90-minute 1080p video at 24 fps would need around 750 Gb of storage space. There is no network which could handle such amount of data. To handle such a technical challenge, various techniques and algorithms are developed.

To allow interoperability among various devices those techniques are standardized in the form of codec standard: AVC/H.264, HEVC/H.265, AV1 and so on. However, these standards only describe syntax and semantics of the compressed video bitstreams. The production of standard-compliance bitstream is entirely up to the video encoder developer.

What are the common blocks of video encoders?

From variety of techniques there are two modules in focus: Rate-control and Mode-Decision.

Let’s review the following image. We have an encoder, which has four compression techniques denoted by Tis, i = 1..4.

Note that Rtarget is the constraint on the output stream size. Thus, in our example Mode-decision module should choose mode T3. Modes T1 and T2provide worse quality and T4 doesn’t satisfy size restrictions. The encoder would need to decide on these modes quickly as there are more frames to encode.

Following the decisions we would need to generate output bitstream. It is a fairly straightforward and somewhat mundane task.

As we are using hardware-based encoder let’s review how it is implemented.

In our case we use Intel® chip with Skylake® microarchitecture and Gen9 GT2 graphics subsystem. Following is a scheme from the official manual. 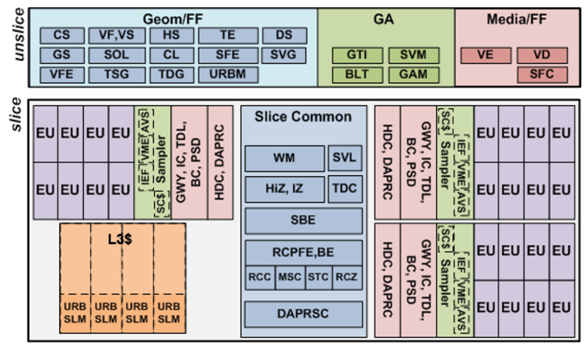 We can split the whole system into two blocks:

It was a long journey but in short here is what we have done:

As a consequence, this gives up to 30% performance quality improvement. In other words, a previously encoded 6Mbps bitstream could be now delivered at 4Mbps bandwidth with the same visual quality.

To trace these improvements, we used the effective VQ Probe tool developed by the ViCueSoft team. VQ Probe is a visual instrument for objective and subjective video quality probation. As a tool, it provides a visual quality comparison between two videos using a split-line and various zoom options. Among its multiple exciting functions, there is plotting of RD Curves, calculating BD Rates and evaluating improvements of the video file.

Figure 1 displays a screenshot from the VQ Probe tool demonstrating rd-curves and it also measures the bd-rate for the original and the transformed videos.

Screenshot of rd-curve from VQ Probe

Time to celebrate? Not yet, as we encountered new challenges in the form of performance decline and complexity increase. This is due to limitation of the original architecture.

And our best friend here to spot the root cause of the problems and understand underling hardware work is the Intel® VTune analyzer.

After installation we created three scripts:

If everything is ok, we will get a report under newly created ‘vtune’ folder.

Let’s analyze one of the reports:

The top most blue/yellow rectangle — actual task execution; blocks below the top one — queue waiting for execution or result. E.g. under point “3”: one task on shader unit is executed, one wait for its completion and the next task is in the queue; MFX block is idle.

And here is the result following all optimizations (with CPU traces): 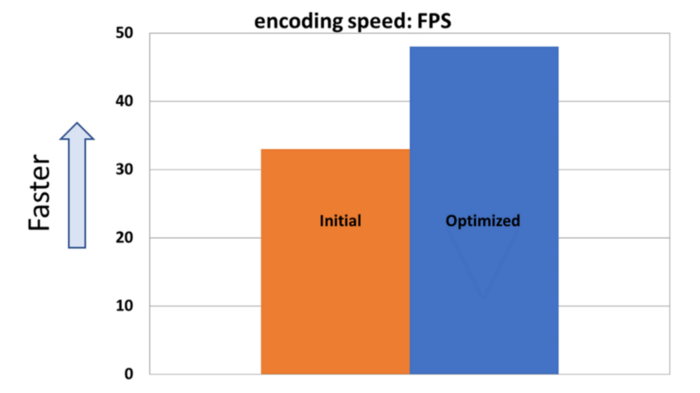 As you can notice from the example above, VTune is a great tool to visualize media pipeline and profile simultaneously CPU and GPU workload. We would certainly recommend it. Hopefully you have found this article useful. Please feel free to get in touch with questions and comments. That’s all for now. Stay connected!