The article is the first in the series of articles about VVC transform. It describes Multi Transform Selection (MTS) as a novel type of transformation used in VVC and demonstrates its application in VQ Analyzer ver. 6.0 and DVK developed by ViCueSoft.

Versatile Video Coding (VVC / H266) standard was released as a new international video compression standard in July 2020. VVC became the successor of High Efficiency Video Codec (HEVC / H265) and it was declared that VVC will be more than 30% bitrate resource efficient due to increasing algorithm complexity, especially transform algorithms.

Transform is a type of data compression. The main goal of the transform stage is to map images or their residual data to the transform area. The choice of the transform depends on multiple factors: effective computational complexity, reversibility as well as data decorrelation and compactness (minimal inter-dependence and energy concentration in a small number of transform coefficients).

In VVC, some new transform features were implemented in comparison with its predecessors. Multi Transform Selection is one of such features.

Compared with HEVC, in VVC more attention is paid to a more precise quantization of transform matrices so that their orthogonality is preserved. In order to keep the intermediate value of the transform coefficient within the 16bit range, after horizontal and vertical transform, all coefficients are 10bit.

Also, to better control MTS both intra/inter modes were specified. To enable MTS, it needs to be enabled on SPS and CU levels and the following conditions need to be met:

If MTS CU flag is equal to 0, DCT-II transform mode is applied for both directions and its maximum sizes for both width and height increase up to 64.

In the table below mode combinations for different blocks are shown: 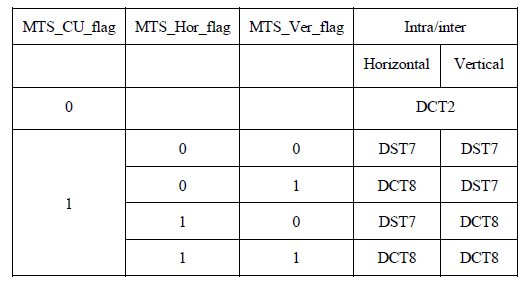 Now, I will demonstrate which MTS mode were used for transformation of every block in our encoded demo-stream. To visualize it, we will use VQ Analyzer ver. 6.0. 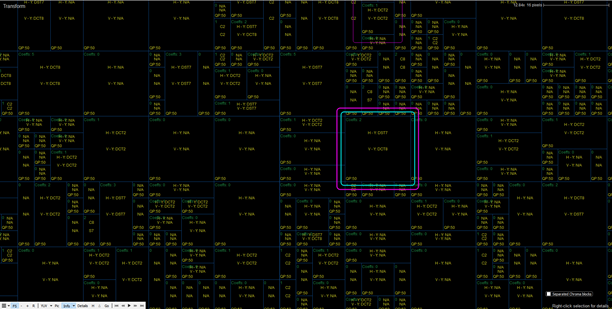 Here we can also highlight all possible variants of MTS: 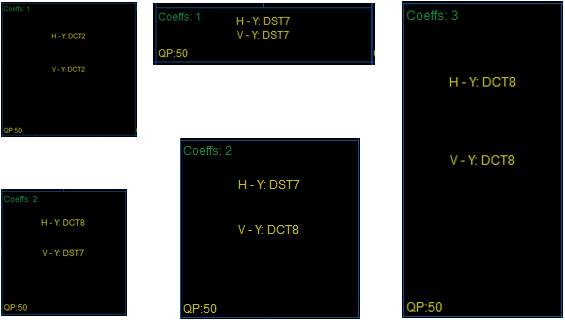 The example of MTS work is shown in pic 6.

Here you can find a demo-stream encoded with a full variety of allowed MTS indexes. To open and visualize it you can use VQ Analyzer ver. 6.0.

This is all for today. In our next article we will continue telling you about VVC transform possibilities.