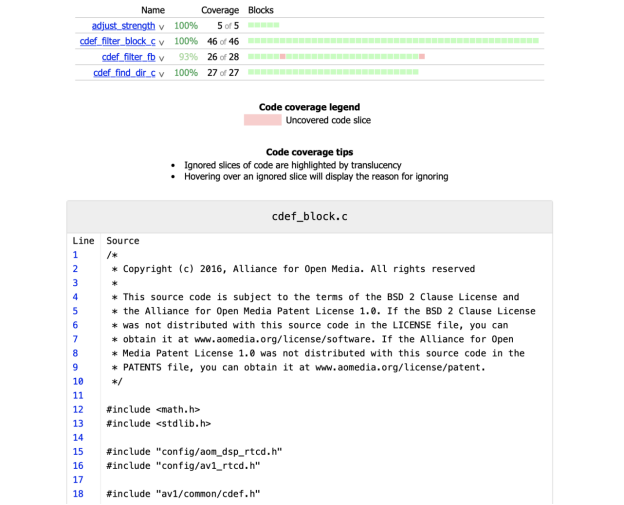 The main reason for this update was the compiler's code coverage with maximum convenience in data extraction and informational content of the reports. As a result, Clang was chosen as the best option!

Rethinking the notion of the code region

One of the main advantages of Clang: it “sees” code regions as a slice of symbols, not as a group of code rows as it was in the previous Analytic tool versions. This greater granularity makes code coverage reports far more detailed and allows observing every needed code section without blind spots.

Edges of a code region can be examined by hovering over a cell in the function summary section of the source code file report:

The primary purpose of the code coverage report was to show the percentage of coverage and make uncovered regions easy to spot. The second issue was achieved by highlighting uncovered regions anew, which makes uncovered code slices brightly red for greater visibility.

It is evident that some code regions are unreachable for the routine program executions. It can be error handling or functions, the execution count of which is not interesting in case of code coverage. For such unneeded slices, highlighting of ignored regions was added using the translucency effect. The reason for ignoring can be observed by hovering over a translucent code section.

A new appearance of the source code section

We remade the entire design of the source code representation to focus the user’s attention on the coverage info only. Ignored regions are not conspicuous, while uncovered ones catch your eye! 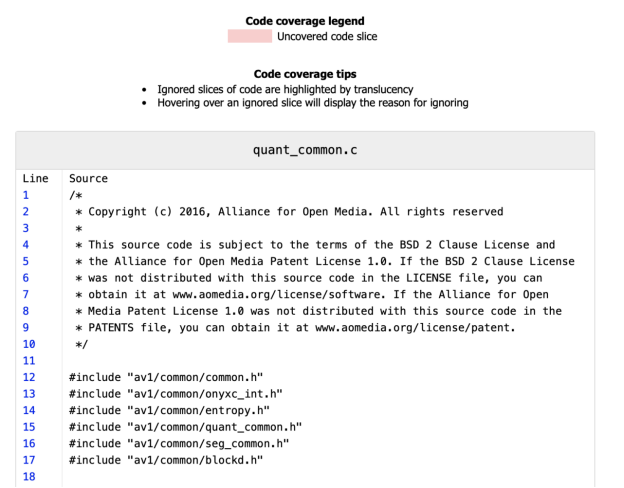 Minor updates which are still worth looking at:

Plans for the future releases

Nothing ever stands still, thus the Analytic tools won't either! In the future releases, we plan to implement VVC code coverage and Linux-based builds which can support it.

What are analytic tools?

The analytic tool is a proven device to analyze syntax and code coverage of video streams. It renders maximum flexibility and can be used with DVK streams and any customer streams as well.

The tools give a graphical representation of syntax coverages, speed up test cycles by reducing the streams and their number, compare the stream coverage.

How to obtain them?