Review of the AV2 development process

On 28 March 2018, after several years of development, the AV1 video codec standard has been released by the Alliance for Open Media (AOM), a consortium founded by several technology companies to create novel royalty-free video coding technology for the internet.

While the adoption of the standard is still on the way – there are already several software implementations that show real-time performance, and hardware codecs are rolling out soon, exploration of the successor codec technology AV2 has already begun. The H.266 standard, a successor to H.265, was completed, and to be competitive, there is obviously a need to start working on another successor. In a comparison report[11] between VVC, EVC and AV1 relative to HEVC VVC provides the best PSNR measures of compression efficiency significantly outperforming AV1: 42% for VVC vs only 18% for AV1.

Current research is underway at the exploration stage, intending to prove that there are still ways for better compression and visual quality. Several research anchors which contain new coding tools beyond the AV1 specification could be found in google libaom repository - research v1.0.0, research v1.0.1, and the latest research v2.0.0. These tools are at the early experimental stage and could be altered significantly in their final form or be discarded altogether.

In the article, we will try to evaluate the research anchor branch and find out if there is any quality improvement.

This paper is arranged as follows. First, in Section 1 brief description of the current experiments is provided. Section 2 contains a description of the test methodology, and the selected evaluation setup is described, while section 3 contains the test execution process using the tools developed by ViCueSoft. And finally, the experimental results are presented in Section 4, followed by the conclusion. 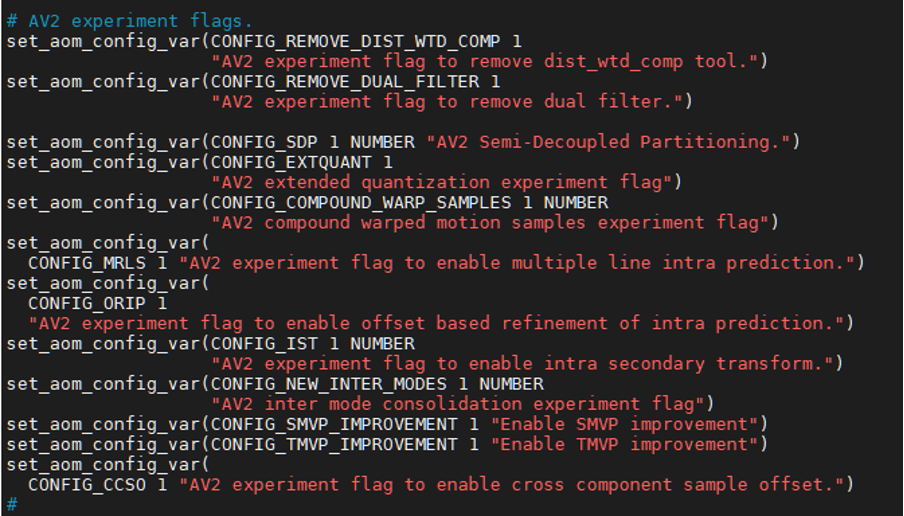 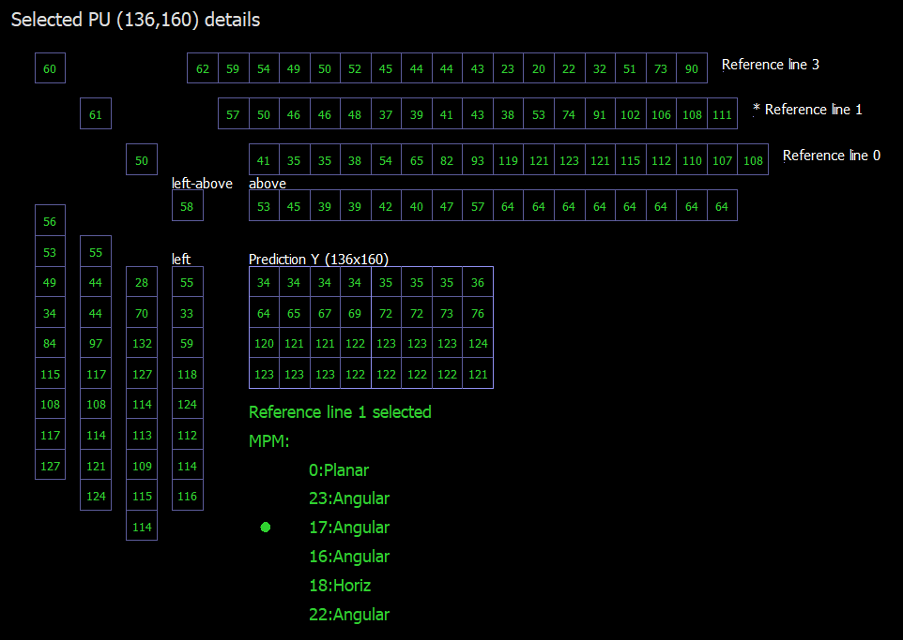 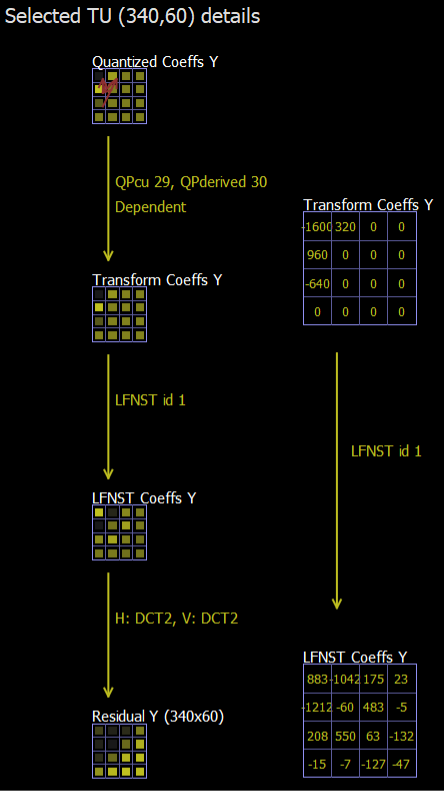 First, we need to set up the common test conditions (CTC) – a well-defined environment and aligned test coding parameters between various encoder implementations to perform an adequate comparison. We will use the AOM CTC document with an extensive description of the best video codec performance evaluation practices to not invent the wheel.

While subjective video quality assessment is preferable, as its measurements directly anticipate the reactions of those who can view the systems being tested, it's a very complex and time-consuming process, so a more common approach is using objective quality metrics. While it's just an approximation of the ground truth, it renders a uniform way to compare various encoders’ implementations against each other and helps to focus on creating new and better coding tools.

To prepare for our test, we need to:

Streams for CTC could be obtained here. Each video is segmented into one or another class. Those classes represent various scenarios for the codec: natural or synthetic video, screen content; high motion and static scenes; high detailed complex video, and simple plain videos.

Our article will use only SDR natural (A*) and synthetic (B1) classes of video streams. You could also find HDR and still images data sets there.

We will set AV1 model implementation as reference and compare it against AV2 research anchor branch. Used hash commits are provided below:

Modern encoders have dozens of various settings, but in the real world, codecs are usually operated in several distinguished operational points, aka presets, which restricts possible settings configurations. In the article, we will evaluate the following scenarios:

There are other scenarios that should be considered for a comprehensive evaluation, like live video streaming (usually called Low Delay), but they are outside the scope of this article. Regarding other settings:

This section describes actual steps done for evaluation. It describes the environment and configuration of all tools.

Encoder preparation is pretty simple: for AV1, we checkout the "master" branch, and for AV2 research – research2 branch.

Building step is straightforward with CMake and make calls. See https://aomedia.googlesource.com/aom for details.

Streams are in *.y4m container that is natively supported by all tools, so there is no need for any other conversions.

Having all inputs prepared, it's time to use Testbot-engine. Testbot is a video codecs' validation automation framework developed by our team at ViCueSoft. It allows us to run outer software iterating over parameters and streams, monitor its execution, and control its output. More information about Framework configuration and its possibilities is here. We need to produce N set of streams for each scenario, where N=<streams>*<qp values> using settings from the previous section.

To get Bjøntegaard metrics parameterized rate-distortion curve, we need to calculate a point for a 2-D plot. We have the actual bitrate on the X-axis and on Y-axis - the distortion (aka quality metric output).

For metrics calculation, we will use VQProbe - a professional tool for video quality measurement that wraps libvmaf and thus supports the commonly used quality metrics, such as PSNR, SSIM, VMAF. You can get more information about VQProbe here.

We use console interface of VQProbe that can be seamlessly integrated into automated test pipelines. Let’s configure VQProbe:

All metrics, average and per-frame could be well visualized in VQ Probe: 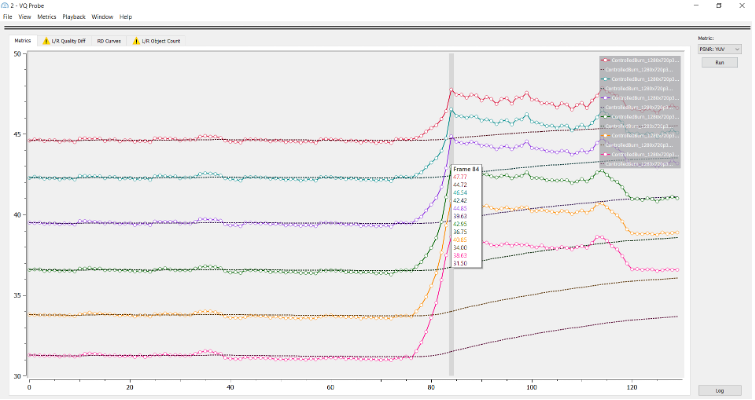 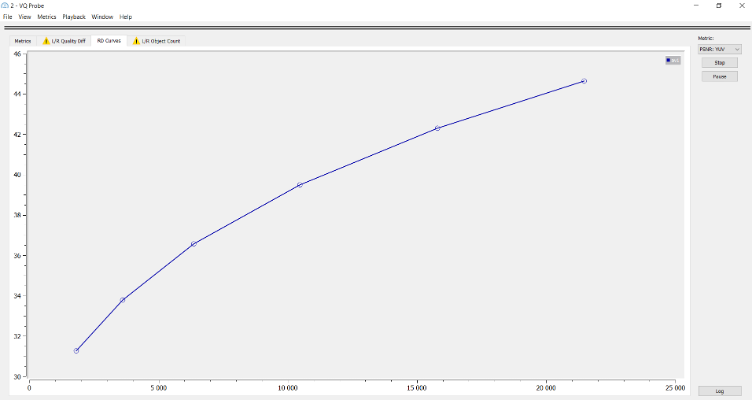 Averaging BD-rate values across streams in each class, we get the following results:

An extensive performance evaluation of the new coding tools candidates of AV2 research branch against libaom AV1 encoder is presented and discussed. Evaluation is done in single pass fixed QP mode in random access and all intra scenarios. According to the experimental results, the coding efficiency, even in such an early stage, shows solid gain against libaom AV1. Notably, for Intra tools, it offers average 7% bitrate savings in terms of VMAF metrics on a wide range of natural and synthetic video content, while in combination with inter coding tools – 4.7%. Due to limited availability of computing resources, complexity evaluation wasn’t evaluated, but rough approximation shows only 1.2x times encoding compleixrt increase and 1.4x time decoding, which shows that the researches of the new standrat am very careful with the complexity of the new features.

All evaluation was possible with the great help of ViCueSoft's VQ Probe and test automation frameworks. That flexibility allows seamless integration and building of automated test pipelines for a complex video codec quality evaluation.